« Back to the blog
Ergonomics

A lot has happened in the development of the office and office equipment over time and fortunately for the better. Our everyday lives have become easier, and we have achieved ergonomic and technological benefits that have an impact on the way we work and on our health.

We have listed 10 things that have had a major upgrade.

Before we all had our own computer in the office, typewriters were used.

The first typewriter was invented by the Danish minister Rasmus Malling-Hansen. He invented his writing ball in 1865 - a hemispherical device where the letters were placed so that the writing speed was as fast as possible, but the most frequently used letters were placed so that they could be operated by the fastest fingers, and with vowels on the left and consonants to the right. 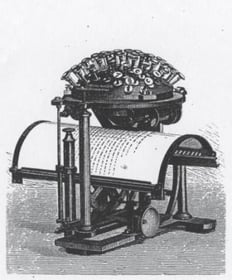 After the writing ball came the typewriter with the flat keyboard, erase tape, and ball head, as many probably are familiar with.

The typewriter was retired when the computer made its entry into the office in the mid-80s. 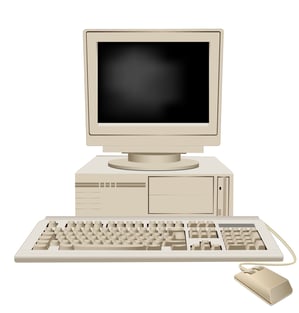 All the glory with monitor and hard drive filled most of the table. The monitor was deep with a black or blue background, and the graphics were largely non-existent. It was not just one you took home under your arm after work.

The computer mouse belonged to the computer. It was in the early 70s square with three buttons at the top. Since then, the development has been enormous. Today, one can get computer mice in many different shapes and settings for all needs. The ergonomic computer mouse prevents pain and injuries, especially for those who sit at the computer for a longer period of time.

Also read: Get rid of pain with a vertical mouse

Our desks have also received something of an upgrade. They have an automatic height adjustable function, so that during the day we can change position and decide for ourselves whether we want to stand or sit. No more sore lower back when walking home from the office.

Like the desk, the chair has become more and more ergonomically designed. Most office chairs available in the market today have infinitely many options so that one can change position as needed. In the 60’s, for example, people sat on soft chairs that did not support the lower back, which they were most likely to hurt after a day of work.

Calculators were really an important thing in the past - all office workers were equipped with a calculator to perform the day's work. Like so many other work tools, this is now integrated into our smart phones. 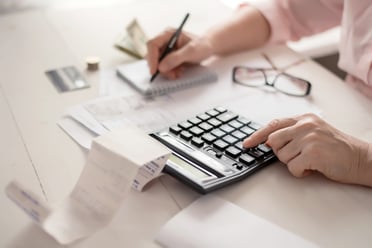 Even something as classic as coffee has been modernised. We have moved from the old filter coffee to a fully automatic coffee machine that can make everything from Cortado to Caffe latte. Now, for most of us, it is over with "tar coffee".

Over the decades, there has really been a change in the way offices are built, focusing on architectural designs with lighting, large work areas, and facilities such as training rooms and roof terraces.

But also the very way we work, in large common office areas often with free office space, has changed over time. There has really been a development when compared to, for example, the office landscape of the 90s with thick wall-to-wall carpets, where the employees sat close together and with tables filled with computers, calculators, telephones and fax machines.

We have gone from focusing on physical meetings in specially designed meeting rooms to largely holding most of our meetings online. Now it is "almost" over being late due to long queues on the highway.

Here we need not say anything other than that we are happy that we do not have to sit and dip a feather in ink.

We hope that you, like us, have come to smile - and perhaps even breathed a sigh of relief and thanked the higher powers for living in the 2020s - on this journey down memory lane.

Ready for the hybrid workplace?

Back to the office in 2021? Here are 8 things that will have changed

Guide to HR: Help employees get back to the office